Avocado (Persea americana) is an edible berry native to the American continent, with Mexico being the largest producer and exporter worldwide.

Avocado is rich in fiber, potassium, folate, and vitamin E, among others. Regarding its fat fraction, and in a similar way to olive oil, most of it is mono-unsaturated, so its consumption helps to reduce the levels of LDL cholesterol in blood and, consequently, cardiovascular diseases.

However, this unsaturated fat is an important handicap when it comes to its preservation since, after the harvesting stage, a series of mechanisms and enzymatic chain reactions are initiated whose final destination is the oxidation of the product.

Once opened in its optimal state, an avocado can be stored for consumption, in refrigeration, for a maximum of 24 hours before its complete oxidation. For this reason, and to extend the shelf life of products that mainly contain avocado in their composition, as in the case of guacamole, the food industry traditionally incorporates synthetic antioxidants such as sodium erythorbate, a food additive that is listed in Europe with the code E-316.

The use of this and other synthetic antioxidants is often used in the food industry mainly due to its low price. However, as an alternative to these antioxidants, BTSA develops 100% natural antioxidants that are highly effective and offer an optimal antioxidant response on the final product, with the guarantee that these products are safe, healthy and will not be questioned by consumers or health authorities in the future.

Next, we present a study developed by BTSA’s R&D department, which aims to determine and compare the increase in oxidative stability of a commercial avocado sauce by adding a synthetic antioxidant and a natural one.

The synthetic antioxidant used was Sodium Erythorbate (E 316), while TOCOBIOL® was used as a natural alternative, a 100% natural antioxidant made from Tocopherols, developed exclusively by BTSA.

1) The first stage of the study consisted in extracting the fat fraction from the avocado sauce. For this, petroleum ether was used as a solvent, due to its low hygroscopicity and its great lipophilic character.

2) Next, the peroxide index that this fat fraction had was measured to know its oxidative state at the beginning of the test and to be able to continue with the oxidative stability analysis.

3) Subsequently, a RANCIMAT®, an accelerated oxidation test, was carried out at the same temperature, air flow and antioxidant concentration. 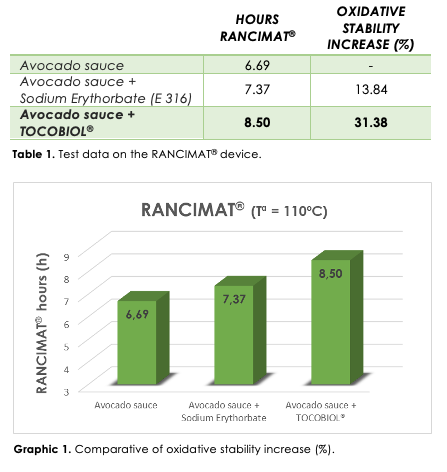 In short, TOCOBIOL® offers greater oxidative protection compared to Sodium Erythorbate (E 316) in guacamole or other avocado sauces, making it a perfect natural alternative to other synthetic antioxidants used by the food industry.

One of the main objectives of BTSA is to offer the food industry 100% natural alternatives that are capable of extending the shelf life of products, thus contributing to reduce food waste as much as possible and the impact that is generated indirectly towards the environment.

From pulses to hummus. Types, properties and nutritional composition.